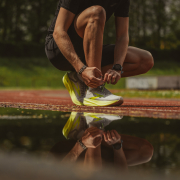 Shin pain while running can be a common and frustrating issue for all runners ranging from the causal/recreational runner, to the elite athlete.

Shin pain can be felt in two distinct regions. Firstly, the “anterior” portion of the tibia which can often be related to a muscular origin. Secondly, “medial” shin pain along the inside border of the tibia is due to inflammation the periosteum (periostitis) which lines the outside of our bones. Clinically this condition is called medial tibial stress syndrome, but it is often called shin splints.

It’s important to note that specific pain and tenderness along the bone the of the tibia (lower leg) can be a sign of a bone stress injury/stress fracture. If you’re experiencing shin pain but unsure of its origin the Physiotherapists at Robina Physio on the Gold Coast can help diagnose and treat you effectively.

Shin splints typically occur after sudden changes in physical activity, particularly running loads. These can be changes in frequency, intensity, volume, terrain or even changes in technique and/or footwear. Examples can include, sharply increasing the number of training days, running longer distances or trying to adopt a forefoot running style incorrectly. We also see shin splints occurring after returning to running from a period of rest e.g. after the offseason.

How Does Shin Splints Present?

Shin splints is characterised by pain along the inside border of the tibia. Swelling in the area may or may not be present. It is common for shin splint pain to:

Muscle weakness and reduced flexibility of the ankle are major features associated with shin splints. The major muscles affected are the Gastrocnemius and Soleus (calf muscles). At Robina Physio on the Gold Coast, we have an added layer of knowledge and therefore understand that it is never as simple as one specific region or joint causing the issue. The human body works as one large functional unit and not just a combination of separate limbs. So, it is crucial we look above and below the shin as well. Foot biomechanics can often be altered in shin splints. But more commonly we see hip and pelvic muscle weakness on both the affected and non-affected side.

How Are Shin Splints Treated?

The first step in managing shin pain is all about load management. This often require decreasing running initially, followed a graduated build-up of running volume and intensity. Getting this process right is the key to success as it will re-build the tissue tolerance of the bones, tendons and muscles of the lower limb. Bone can be very unpredictable with how it responds to training, so guidance from an expert practitioner like at Robina Physio on the Gold Coast is very important.

The next step of the process involves 2 equally important parts. Firstly, we need to loosen the tight structures around the lower limb. This can be done with soft tissue massage, dry needling and stretching exercises. Secondly, we need to strengthen your calf muscles and the muscles controlling the biomechanics of you lower limb. This would include calf raises, glut maximus, medius/minimus and core stability exercises.

Finally, in some cases footwear modification or orthotics may be considered. According to the research, the jury is still out as to whether orthotic therapy works for shin splints. In certain people orthotics will be very helpful, but not everyone. A great way to test if shoe modification or orthotics will help is to briefly strap the foot and replicate what a foot orthosis might do. A positive outcome is suggestive that a more supportive shoe or orthotic will be useful.

Here are a few of things you can try at home to help manage your shin pain. 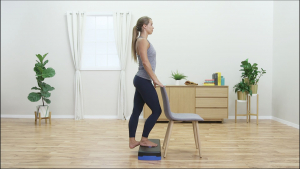 If you’re struggling with shin pain and/or shin splints the team at Robina Physio on the Gold Coast are here to help and share our knowledge and expertise. Call our clinic on (07) 55787233 or BOOK NOW online.